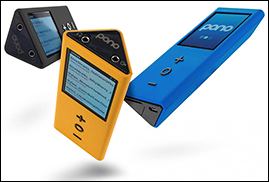 LOS ANGELES (CelebrityAccess) — A year after announcing the demise of his portable music player Pono, Canadian rocker Neil Young is still beating the music quality drum with the launch of a new music streaming service, the Neil Young Archives.

The Neil Young Archive is a collection of hundreds of tracks from Young’s albums and live performances, all streamed at a rate that is much higher than the standard streaming rate of 320 kilobits per second.

“The thing is, I want the sound of music to come back — and it’s gone,” Young told the Chicago Tribune in a recent interview. “CDs have less than 20% of the quality that music could be, and MP3s in most cases have only about 5% of what’s on the master recording.”

The archive is cleverly packaged as well, with the website designed to look like a combination of an old file cabinet and a guitar amp. A toggle switch allows listeners to toggle between standard streaming rates and the full rate available for the track and a meter displays the current streaming rate for the track being listened to, with bit rates that are often measured in the thousands instead of the hundreds as with other streaming services.

This isn’t Young’s first foray into trying to serve high-quality digital music to his fans. He launched his Pono portable music player via a successful Kickstarter in 2014, with promises of digital music at high bit rates, however, the timing of the project seemed off. The Pono was competing against smartphones, which could store tens of thousands of songs and which most people were already carrying.

The Pono also debuted as the transition from digital downloads to streaming music had already started, leaving the product to compete for a niche that was fast becoming obsolete. As well, the physical design choices for the Pono music player left many observers scratching their heads. Instead of being an easily portable and compact personal music player, the Pono came in a triangle-shaped package that was readily likened to a Toblerone candy bar – awkward to carry around but lacking the chocolatey goodness.

However, for Young, none of those issues was the primary road block to the success of the Pono. Instead, Young lays the blame for the failure of the Pono at the feet of the labels.