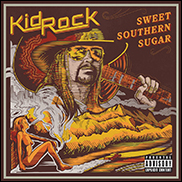 Produced by Live Nation, the tour kicks off on Jan. 19th with a show at Bridgestone Arena in Nashville. The tour runs through March 24th, when Kid Rock puts in a final performance at Mandalay Events Center in Las Vegas.

The tour will be supporting his new album "Sweet Southern Sugar" which goes on sale on November 3rd. "Sweet Southern Sugar" is Kid Rock’s first album recorded in Nashville and features his spontaneous summer releases “Greatest Show On Earth” and “Po-Dunk,” as well as recent single “Tennessee Mountain Top.” The album ranges from country to classic rock, with a little rap sprinkled in between, according to Live Nation.

As if to emphasize his focus on music, and perhaps to allay recent controversies surrounding his support for U.S. President Donald Trump, Kid Rock, whose real name is Robert Ritchie, has put the kibosh on rumors that he was planning to run for a U.S. Senate seat in his home state of Michigan.

In an appearance on Howard Stern's SiriusXM radio show on Tuesday, Rock ruled out the bid, saying: “fuck no, I’m not running for Senate,” adding, “are you fucking kidding me? Who couldn’t figure that out?”

For months, Rock has dangled the red meat of a possible Senate bid in an effort to unseat Debbie Stabenow, the senior Democratic Senator from Michigan. And even after putting the lie to the rumors, Rock still couldn't' resist an inflammatory and admittedly threatening tweak.