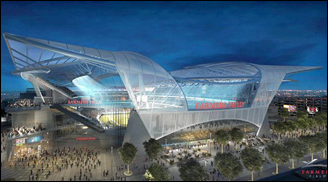 LOS ANGELES (CelebrityAccess MediaWire) — While there still isn't an NFL team to play in the planned stadium, a design firm has released the latest design for the massive venue.

Los Angeles-based architecture firm Gensler revealed their new vision for Farmers Field on Tuesday along with Tim Romani, CEO at ICON Venue Group, who are overseeing the project for AEG.

The new design for the 72,000-seat stadium ditches the retractable roof in exchange for what AEG described as a "deployable" roof — light fabric panels that can be stored off site. While it takes longer to deploy, it reduces costs and requires less stuctural support.

"We have really challenged the Gensler team to create a unique design for Farmers Field that is destined to become another distinguished signature building for Los Angeles and at the same time a remarkable achievement in venue functionality and sustainability…This stadium and event center will be like nothing you’ve ever seen or experienced," Tim Romani said in a news release.

AEG is currently working with the city to prepare an environmental impact for the project, which is expected to be completed and available for the public in January 2012. The current plan for the stadium itself is to be ready for the 2016 football season. – CelebrityAccess Staff Writers