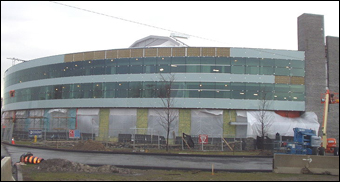 KINGSTON (CelebrityAccess MediaWire) — A concert on Saturday by the Tragically Hip to mark the opening of Kingston's new downtown arena may not go off has planned after the venue failed to get an occupancy permit, the Kingston Whig-Standard reported.

The new venue, now named the K-Rock Centre, hasn't managed to get its fire and public safety measures sufficiently up to snuff to earn a permit and if tests on the fire systems today don't go well, it appears doubtful that the centre will open. What that means for the sold-out Hip concert is still up in the air.

If Kingston's new downtown arena fails to open this weekend, the kickoff concert by local rockers The Tragically Hip will likely be rescheduled, not cancelled.

"I don't know that we'd be looking at a cancellation," Neil Shorthouse, a senior official for Arcturus/SMG, the firm managing the city-owned facility told the Whig-Standard. "It would likely be a postponement."

Another option may be to move the concert to nearby city's half-century-old Memorial Arena but at this point, that seems unlikely. Additionally, two Kingston Frontenacs Ontario Hockey League are scheduled for this weekend are also both in jeopardy.

These matters are compounded by the fact that if the Centre does manage to open on time, concert-goers may have to wade through a picket line to attend the event.

Representatives from Arcturus/SMG International Alliance of Theatrical stage Employees Local 471 have stated that they plan to hold a protest because they claim that they were not given a fair chance to bid for work at the site.

Earlier this week, the union states that their representatives met with Arcturus for a 30 minute meeting, then a shorter 15 minute meeting. Arcturus was unmoved however and subsequently informed the union that they would not be working the Hip show. Now the union is securing buses and has stated that it expects 200 hundred of its members to attend the protest.

"The bottom line is there doesn't look to be any remedy on this issue," Mark Hollingworth, business agent for Local 471 told the Whig-Record. – CelebrityAccess Staff Writers