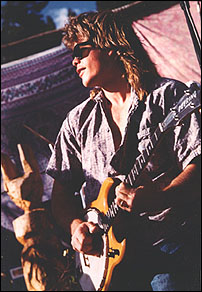 A memorial will take place at an as yet to be determined
date in the spring. To help offset costs of Vann's treatment, a fund has been set up.
Donations, cards and letters can be sent to P.O. Box 393, Nederland, CO 80466.

the songwriter whose country music classics included the Patsy Cline hit "I Fall to Pieces" and the Grammy-winning "Busted" sung by Ray Charles, has died. He was 74.

More than 100 of his songs reached the Billboard country singles Top 10, and in 1961 he had 15 songs on the country charts at the same time, a record that still stands. He was inducted into the Country Music Hall of Fame in 1997.

Along with "Fall to Pieces," Howard's early hits included "I've Got a Tiger by the Tail," co-written and sung by Buck Owens. More recently, he wrote "Why Not Me?" for The Judds and "Blame it on Your Heart" for Patty Loveless. "Busted" also was sung by Johnny Cash and John Conlee, among others.

Howard had arthritis and heart problems the past few years, but his death at home on Sunday was unexpected, said his wife, Melanie Howard.

"He had some health problems but continued to rock on," she said. "I guess God wanted him there to see Waylon (Jennings) and all of his other buddies."

Asked once for his definition of country music, he replied: "Three chords and the truth."

After growing up on a Michigan farm, Howard moved to Los Angeles in 1955 to write songs, but supported himself with a factory job.

"During that period of time, I never knew there was that much money in songwriting," Howard once said. "I was just writing because I loved it. I never thought I'd be able to quit the factory and make a living full-time as a writer."

Word of Howard's talent circulated among singers including Tex Ritter, Johnny Bond and Bobby Bare. In 1958, Charlie Walker recorded "Pick Me Up on Your Way Down," which went to No. 2 on the country charts.

"Heartaches by the Number" topped both the country (Ray Price) and pop charts (Guy Mitchell) in 1959, and he moved to Nashville the next year.

In Nashville, Howard fell in with fellow writers like Willie Nelson, Roger Miller and Hank Cochran, with whom he wrote "I Fall to Pieces" for Cline.

Along the way, he befriended each new generation of writers, calling them his "juveniles."

Getting Howard's approval meant others in the industry would take you seriously, said Matraca Berg, who co-wrote "Strawberry Wine" for Deana Carter.

"It upped your station quite a bit if Harlan gave the OK," she said. "People listened to him."

From 1983 to 1995, the industry celebrated Howard's birthday each year with the Harlan Howard Birthday Bash. The event, a benefit for songwriter organizations, drew everyone from secretaries to country stars to a huge outdoor picnic.

"He's one of the best half-dozen songwriters that ever came out of our industry," Walker said. "He's right up there with Hank Williams."