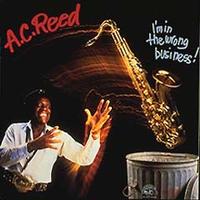 (CelebrityAccess News Service) — Chicago-based blues saxophonist, vocalist, songwriter and bandleader A.C. Reed, a leading elder figure and the best-known sax player of the Chicago blues scene, died February 25 from complications due to cancer. He was 77.

During the course of his career, Reed played his fat-toned, elegantly simple tenor sax with artists like Albert Collins, Buddy Guy, Bonnie Raitt, Stevie Ray Vaughan and Son Seals both on stage and on record, as well as leading his own band, the Spark Plugs. His three solo albums and numerous singles all featured his wry, humorous songs,some of which have been covered by other artists including Magic Slim, Charlie Musselwhite and Eddie Shaw.

Born Aaron Corthen in Wardell, MO in 1926 and raised in downstate Illinois, Reed first heard blues saxophone on an Erskine Hawkins 78 he heard on a jukebox. He was so inspired by the sound of the big honking horn, he decided he wanted to learn how to play the saxophone. DownBeat called Reed, “one of the blues' most incisive originals.”

He moved to Chicago in early 1942 and found work at a steel mill. With his first paycheck, he bought a saxophone at a pawnshop. He studied at the Chicago Conservatory of Music for a few years, emulating his musical hero, tenor szxophonist Gene Ammons. While working at the mill during the day, Reed began gigging on weekends with a variety of blues combos, eventually coming under the tutelage of J.T. Brown, Elmore James' tenor sax player.

By the end of the 1940s, Reed was gigging regularly with Willie Mabon and Earl Hooker. During the 1950s he toured across the Midwest and Southwest with Hooker and Dennis “Long Man” Binder. Returning to Chicago in the early 1960s, Reed became an in-demand session player for the Chief and Age labels, and recorded his first single for Age, “This Little Voice,” in 1961. He recorded more singles for Age, USA, Nike and a few other small Chicago labels during the rest of the decade, while playing regularly in the city's blues clubs.

Reed joined with Buddy Guy and Junior Wells' band in 1967, toured Africa with Guy and Wells, and even joined the Rolling Stones tour (still as a member of Guy's band) in 1970. He left Guy's band in 1977 and joined first Son Seals and then Albert Collins, with whom he spent over a decade as a member of Collins' band, The Icebreakers and recorded with Seals and Collins,

Reed's exposure with Collins led to a reinvigorated solo career. He recorded four songs for Alligator's “Living Chicago Blues” anthology series in 1980 and an album for his own Ice Cube label, “Take These Blues And Shove 'Em,” in 1982. By 1983 Reed was performing regularly with his own band, The Spark Plugs, logging over 250 performances a year. Reed's 1987 Alligator album “I'm In The Wrong Business” featured cameos from Bonnie Raitt and Stevie Ray Vaughan.

He is survived by a sister, Sarah Corthen of Carbondale, IL. – by Bob Grossweiner and Jane Cohen

MALIBU, CA (AP) — Jerome Lawrence, who co-wrote hundreds of plays for stage, radio and screen, including "Inherit the Wind" and the musical "Mame," has died. He was 88.

Lawrence died at his home Sunday from complications related to a stroke he suffered a year and a half ago, according to his niece, Deborah Robison.

With the late playwright Robert E. Lee, Lawrence wrote "Inherit the Wind," based on the 1925 trial of John Scopes, a Tennessee school teacher convicted of teaching evolution. The play was widely produced and sold almost 2.5 million copies in printed form.

Lawrence and Lee collaborated for more than 50 years on such projects as "The Night Thoreau Spent in Jail" and "Auntie Mame," a comedy about a freethinking woman that was adapted from a novel for the big screen, and for the stage as the musical "Mame."

Lawrence worked as a reporter in the 1930s at the Wilmington News Journal and New Lexington Daily News in his native Ohio, before moving West to work at a radio station in Beverly Hills. He joined CBS radio as a staff writer in 1939, and joined with Lee in 1942 to create patriotic programs for the network and Armed Forces Radio during World War II.

Lawrence was named to the national Theatre Hall of Fame in 1990.