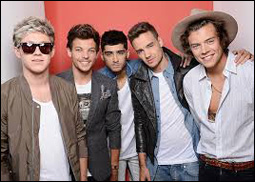 LONDON (VIP-BOOKING) — One Direction is the first touring artist in 2014 to break the $200 million ticket sales barrier based on revenue reported last week from the European and North American legs of its Where We Are world tour. The London-based band heads up the weekly slate of Hot Tours with $130 million in revenue from a 10-week span during the tour’s summer trek that includes stadium performances in 11 European markets and nine in the U.S. and Canada. After adding the $130 million from this tally to the sales that have already been reported this year, ticket sales from the tour now total $230 million from more than 2.7 million sold tickets at 53 sold out concerts.

The Where We Are tour, supporting the group’s 2013 album Midnight Memories, launched in April with a 10-show South American leg through six countries. More than 400,000 tickets were sold during the run that included two-show stints in Santiago, Buenos Aires and São Paulo. The European leg followed in late May, beginning with 11 performances at stadiums in the U.K. and Ireland as well as a festival appearance at BBC Radio 1’s Big Weekend in Glasgow on May 24. Dublin, Manchester and London each hosted the tour for three-night runs during the U.K./Irish segment of the tour that was reported to Billboard earlier this summer.

This week’s tally begins with a two-show stand in Stockholm on June 13 and 14 and includes two-night runs in four more cities: Copenhagen, Paris, Amsterdam and Milan which logged the highest attendance count among the European markets with two performances. Attendance at Milan’s Stadio San Siro totaled 115,931 for concerts on June 28 and 29, generating $7.7 million at the box office. The number of fans at two concerts in Paris was 1,759 less than Milan, but the national stadium of France claims the top gross. Ticket sales at Stade de France totaled $9.7 million for concerts on June 20 and 21.

The Where We Are tour’s only engagement in Canada kicked off the nine-week North American leg of the tour that continues through early October. Toronto’s Rogers Centre hosted 1D for two nights on August 1 and 2 with a sold ticket count of 98,851. The first three-show engagement during the North American leg came on August 7-9 at Gillette Stadium in Foxborough, Mass. The home venue of the NFL’s New England Patriots logged a sold ticket count of 148,251 generating $13.4 million in sales, the tour’s top gross at a North American venue. One Direction will play one more three-show engagement during the trek through U.S. cities. The Rose Bowl in Pasadena, Calif. will host the boy band on Sept. 11, 12 and 13. The tour is set to wrap on Oct. 5 in Miami with a final performance at Sun Life Stadium.

Scoring the No. 2 slot on Hot Tours is Cirque du Soleil’s touring production, Michael Jackson the Immortal World Tour, now in the homestretch of its multiple-year run that began on Oct. 2, 2011. This tally includes $3.7 million in ticket sales from an eight-show engagement in Mexico City. The Palacio de los Deportes hosted the tour from Aug. 20 through 24 with more than 52,000 sold tickets during the run. Only one venue remains on the schedule for the tour that wraps at the end of August.

Bruno Mars earns Hot Tours recognition, landing at No. 3 this week with sales reported from two sold out performances in New York City. Madison Square Garden hosted his Moonshine Jungle Tour on July 14 and 15 with 31,434 fans in attendance and $3.4 million at the box office. Mars performed at two other venues in the metropolitan New York/New Jersey area last summer during the first leg of the tour. He played to sellout crowds at Barclays Center on June 29, 2013 and Prudential Center in Newark, N.J. two nights later.