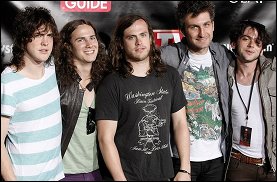 MGMT wasn't even a BAND!  They'd gone to Wesleyan together, but they weren't
even living in the same damn town.  No one serviced records, but KROQ found
a copy and started blasting them.

It's about the music, and luck and…not needing to be rich.

Then there's Don Strasburg.  Not only did he sell out MGMT at Red Rocks,
he's winning with a ton of acts you've never heard of.  Pretty Lights?
That's a burgeoning seller.  And remember that husband and wife team who
played with the Dead, the Godchauxs?  Their kid has a hit act that I can't
even remember the name of.  And then there's Skrillex.  I just had to Google
it to find out the spelling!

These are not wannabe acts, dunning you to pay attention, they're making
money and you've never even heard of them and they don't really care!

How do you make it today?

You've got to be good.  And then, you've got to be vouched for by another
act with a fanbase.  People read the blogs and the Twitter feeds.  If their
favorite act likes a new act, they'll check them out.  They'll go to the
show.  And they'll tell everybody they know!

What has this got to do with radio and television and..?

Every year I go to this conference in Aspen.  Nonbelievers think it's an
excuse for a ski vacation.  Rather it's a time to bat around ideas and learn
what's truly going on from the people who do it and bond with them in a way
not possible anywhere else.

The dude who runs Goldstar went on to say it wasn't so much about the
discount but informing people who don't know about the show!  Amazing
concept.  That's the number one problem, making people know there's a show.

Not that price isn't important.

But all this b.s. about VIP tickets and scalpers and…  Is for a dying
business made up of classic rock acts on their last breath and evanescent
one hit wonders propped up by a dying media.

Bands are breaking like crazy.  But since the self-referential mainstream
media doesn't read about it in sister publications, conventional wisdom is
the music business is dying.  No, it's being REBORN!

What's hot right now is deejays.  Heard of Rusko?  Just did sell out
business for AEG in Denver.

And how do these deejays get a start?  Festivals.  Where the sneezers, as
Seth Godin labels the tipsters who get things going, discover them and
spread the word.  For the shows with electronica acts he's never heard of
that he can't sell Strasburg hires a guy, Sheldon, who manages to fill the
auditorium…  How does he do it?  He's got a network, he's got
relationships.  This is not your father's music business where you bring out
a shotgun and hope you hit someone.

And these new acts always play cheaply.  And their songs may not be hits on
the radio, but they're hits in the culture.

I learned more listening to twenty five people argue about the business in
Aspen than I ever do going to lunch or a show in L.A.  These are the
believers, these are the people who need to be in music even if the pay
sucks.  They've got their ears to the ground, they know what's truly going
on.

Sure, there are way too many shows.

Then again, when the airlines kept losing money, they reduced the inventory
and now they're profitable.  And tickets are dirt cheap.  Sure, there are
add-ons and the experience sucks, but people want to fly.  Do people want to
go to your show?  If not, nothing you can do will get them to go.

The Rolling Stones and the Eagles and Madonna function in a sterile dying
business whose problems get trumped up so we think they're everybody's
problems. They're not.

The music business is being reinvented right now as dramatically as it was
when the Beatles invaded and the rest of the Brits followed them.  There are
no shortcuts, there's only playing because you love to and putting yourself
in the marketplace.  A zillion reviews will get you nowhere near as far as a
bunch of zealots who believe you're godhead and tell everybody they know not
for pay, but because it makes them feel good inside to turn friends on to
great music.

The Aspen Conference is the highlight of my year.  The light attendance made
me think it was fading, on its way out, but today's conversation was better
than any we've had in years.  Maybe because only the diehards still come and
all the poseurs are gone.

I'm so excited, I just had to tell you.