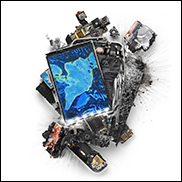 (Hypebot) –In this piece, Cortney Harding looks at the struggles faced by music-based social networks like Crowdmix and Myspace, and why problems with scalability so often doom these networks to failure.

A few months ago, when “The Music Startup Meltdown” first ran, I singled out Crowdmix and its multi-million dollar raise as a sign that things might not be so bad after all. Well, we’re none of us perfect, are we?

In the short period since March, Crowdmix appears to have joined the meltdown, first with announcements of layoffs, then the departure of its CEO and news that employee pay was being withheld (although they have reportedly settled up). The product, a music-based social network, was due to launch in May; but we’re nearing the end of June, with no sign of it being made available.

I did manage to snag a product demo last month and to be perfectly honest, it wasn’t bad. What I saw was cleanly designed and totally competent — but that’s likely not enough to save it. The biggest problem with any music-based social network isn’t anything design or engineering or business development can solve — it’s all about scale, and the catch-22’s therein.

Crowdmix certainly wasn’t the first social network to try its hand at capturing the music market, and despite the tragic history of this space, it probably won’t be the last. The initial version of MySpace was arguably the first music social network, and for a time it was massive, although it was largely contained to certain genres. Part of the reason the first version of MySpace became so big in music was because there weren’t really any other places, YouTube aside, where fans could stream tracks for free. MySpace 1.0 started to crash and burn shortly thereafter, and a relaunch was largely unsuccessful.

One of the reasons the new MySpace didn’t make it was that it suffered from the problem that bedevils every social app — scale. I think my interaction was the new MySpace was fairly typical — I got an invite, signed up to see what it was all about, didn’t see anyone I knew there, and left. I never went back, and neither did most people.

If/when Crowdmix makes it out of the gate, they’ll face similar problems. Users already have Facebook, Twitter, Instagram, and Snapchat to serve their social needs — a new platform that requires some time and effort needs to have a compelling hook to keep people engaged and willing to give it multiple chances. One of the smartest things Facebook ever did was start on college campuses, where even if you got a few hundred people to sign up at launch, chances were other people on that campus knew at least one of those people, and it could grow from there. Unless it pivots dramatically, Crowdmix can’t really do that.

And here’s the other thing that could doom Crowdmix — scale. Terrible, right? It needs to get to scale to succeed, but once it gets to scale, many of its value propositions become moot.

Crowdmix’s whole pitch is that fans want to be part of communities built around artists, where they can connect with other fans, presumably to chat, make friends, find dates, see shows, etc. All great, but here’s the problem — the bigger the artist, the less likely you are to have anything in common with their other fans. Think of a niche band or genre — if you like some obscure form of metal, for instance, there’s a reasonable chance that you might have other things in common with people who like that niche band or genre. But unfortunately, a service just for people who like a weird indie band doesn’t make enough to pay back all those investor millions — so they need to build fan communities for artists like Justin Bieber. And not to pick on the Biebs, but his average fan probably doesn’t have all that much in common with another average fan, and no one really wants to be part of a group with thousands of random people who only have a big, unreachable pop star in common.

Add to this that many niche communities are fairly well-served in terms of places to connect — Meetup is still a massive platform, and those old-school message boards still serve a function as well. When you take everything into account, Crowdmix seems to be a perfectly well-done product in search of a problem.

I don’t want this piece to be taken as an attack on Crowdmix, especially because other social music networks aren’t doing all that well, either. Cur, which was pitched as a lower-cost streaming service that had social features, hasn’t launched yet and has also been beset with executive turnover and setbacks. Of the roughly one million “meet people and discover bands” apps I’ve been pitched, no one has broken out of the pack. Blackplane, which was supposed to replicate Lady Gaga’s Little Monsters network for other artists, never got airborne.

Social networking around music seems to be a feature, not a product. The Bumble/Spotify partnership, where you can match based on music tastes, is cute and fun — it is in no way central to either product’s core, but a nice little add-on. Apple Music could rebuild Connect to create some more social features if it wanted to, and maybe Spotify will add a few more social integrations for fun — but they’ll never be something either company massively invests in.

As I said above, I’ve only seen one demo of Crowdmix, and maybe they’ve got something super special and secret up their sleeves that will make me eat my words and sign up. But the road to success as a music-based social network is riddled with obstacles, and so far no one seems to have figured out how to overcome them.

Cortney Harding is a consultant working with music and entertainment start-ups.