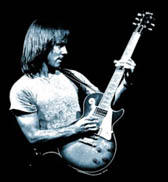 By time I moved to Los Angeles, Sammy Hagar had already left Montrose. The ubiquitous airplay of the band's debut had already faded. And therefore I only caught the fumes of Sammy playing the classics as the decade wore on.

Music used to be regional. If you didn't live in the neighborhood, if your local AOR station did not play it, it's almost like it didn't exist. Word of mouth stopped at the high school. In the pre-Internet era, Meatloaf could have one of the biggest selling albums of all time and be virtually unknown on the west coast.

In the old days, the seventies, actually up until the turn of the century twelve years ago, if you didn't own it, oftentimes you could not hear it. And with limited funds, great swaths of music passed you by. But it's all resurfaced now.

And that's why the Internet's a good thing. It's unleashed the power of musicians. Unfortunately, by allowing us to hear the greats, we've had to be exposed to the efforts of the less than great, but it's better this way.

I came to Ronnie Montrose late, both in time and his career. It was this track I heard on XM, "Voyager", from his band Gamma. There's a swagger, it's a cut that sounds straight out of Robin Trower's canon after Trower left Procol Harum. Still, Trower's influenced by Hendrix, he plays in a flurry of notes and sounds, whereas Ronnie's playing was always about fluidity, once you got by the riffs Ronnie soloed like a space alien from the west coast, who was more influenced by Jeff Beck than Jimi.

And getting hooked on "Voyager", I immediately downloaded Montrose's debut, and experienced the magic almost forty years later, the sound was just as fresh, the impact was still as great.

I spent most of the day reading about the rich, who are sometimes famous. And on one hand you feel left out, they're members of a club you're unable to join. But how lonely is that club without the arts. Isn't it interesting that all the fat cats buy art, scarf up the good concert tickets. Because when it's all said and done that's where the power resides, in the notes emanating from a stinging guitar.

Maybe it's hard for young 'uns to understand that in that decade after Woodstock, during the time of Watergate, axemen ruled the earth. We debated long and hard who was best. And Ronnie Montrose had a place in the pantheon.

He's now gone, but the music lives on.