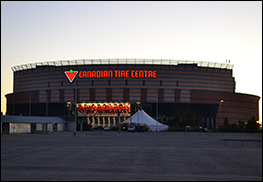 OTTAWA, Ontario (CelebrityAccess) — Canada's capital city of Ottawa may be home to a major new NHL arena for the Ottawa Senators after the team and its partners struck a deal with the Canadian government.

According to the Globe & Mail, National Capital Commission, which manages federal lands and events in the Ottawa-Gatineau region announced plans to develop the arena and a related mixed-use community in a downtown area of Ottawa called LeBreton Flats that has sat mostly vacant for decades.

In addition to the new arena, the development would include condos, public housing, a public square, an ice rink, a sports complex, shops and walking paths, the Globe & Mail reported.

"It's a great day for the city," said Ottawa Mayor Jim Watson, said per the Globe & Mail. "I'm very pleased that after 50 or 60 years of seeing that land sit vacant, I'm very optimistic in the next couple of years we'll see shovels in the ground and eventually [be] cheering on the Senators downtown."

In recent years, the Senators have been struggling with attendance and owner Eugene Melnyk has been publicly discussing moving the team. NHL commissioner Gary Bettman has also been beating the drum and said the new downtown arena is "vital" to the Senators remaining in Ottawa, the Globe & Mail said.

According to the Globel & Mail, construction on the new arena could start as early as 2019. The Senators currently are tenants at Canadian Tire Centre on Ottawa. The 20,500-capacity arena was opened in 1996.