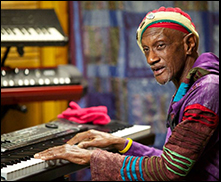 EVERSON, WA (CelebrityAccess) — Bernie Worrell, the keyboardist and founding member of Parliament-Funkadelic widely known as the 'Wizard of Woo,' died on Friday. He was 72.

In January, Worrell revealed that he was suffering from late stage cancer in his liver and lungs and in May, Judy provided an update that revealed that Worrell was in grave condition.

A native of New Jersey, Worrell was known as a child prodigy who started studying classical piano at the age of three. He would go on to prominence for his work with Parliment-Funkadelic, helping to define their sound and co-writing and performing on numerous hits including “Flashlight,” “Atomic Dog,” “Aqua Boogie,” “Cosmic Slop” and “Red Hot Mama”.

As well, Worrell was one of the first musicians to make use of the Moog synthesizer and its distinctive sound.

“When the synthesizers came about, my having been brought up classically and knowing a full range of orchestra, tympanis and everything, I knew how it sounded and what it felt like. So, if I’m playing a horn arrangement on keyboard, or strings, it sounds like strings or horns, ’cause I know how to phrase it, how a string phrases, different attacks from the aperture for horns, trumpets, sax or trombones," Worrell said.

Following his stint with P-Funk, Worrell performed on several albums with the Talking Heads, including their seminal hits The Name of This Band Is Talking Heads, Speaking In Tongues.

Worrell also served as a studio musician, working with producers such as Bill Laswell on a variety of projects and most recently toured until last year with his own group The Bernie Worrell Orchestra.

In 1997, Worrell was inducted into the Rock and Roll Hall of Fame along with Parliament/Funkadelic. – Staff Writers