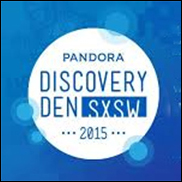 OAKLAND, CA (CelebrityAccess MediaWire) — Pandora (NYSE:P), the leading internet radio service, today announced the lineup for its annual Discovery Den taking place during the South by Southwest (SXSW) Conference and Festival. Returning to The Gatsby in the heart of Austin’s Red River District, more than 35 critically acclaimed artists are scheduled to perform over four days. Each day of the Discovery Den will highlight the most exciting musicians in their respective genres – electronic, hip hop/R&B, Americana and rock. Fans will be able to experience the Discovery Den both in-person and online via a multi-platform live audio stream.


“As we continue to partner with artists to produce world-class events, our Discovery Den at SXSW has become one of the highlights of the year,” said Tommy Page, Head of Industry Relations. “With a different genre each day, we’re able to showcase an incredible roster of both emerging and established artists, many of whom, like Charli XCX, Macklemore & Ryan Lewis and Magic!, have gone on to have chart-topping hits in past years.”


Pandora listeners have now created over seven billion stations and provided over 50 billion pieces of thumb feedback, enabling Pandora to connect artists to an ever-growing fan base of more than 80 million monthly users. The Discovery Den celebrates this process by bringing together an eclectic lineup of artists across multiple genres, providing access to all Pandora listeners via the live audio stream in addition to the hundreds of people in attendance.


All performances will be broadcast live on Pandora’s web, mobile and tablet platforms. Visit www.pandora.com/SXSW for the complete artist lineup, custom mixtapes, daily programming information and access to the live audio stream.
.


The Pandora Discovery Den performances include:

• Wednesday, March 18 will feature electronic and pop music from:

• Thursday, March 19 will feature hip hop and R&B music from:

• Friday, March 20 will be co-presented with The Americana Music Association and feature Americana music from: