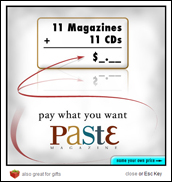 DECATUR, GA (Hypebot) – Taking a page from the Radiohead playbook, beginning today and continuing for the next two weeks, AAA/indie music magazine PASTE is letting readers name the subscription price. New or renewing subscribers can pay as little as $1 on PASTE's
web site or whatever they think it's worth. Those paying more than the typical $19.95 one year subscription will be thanked in a future issue of PASTE.

The campaign came about from a casual conversation at the PASTE offices discussing the recent Radiohead campaign and the Jim Collins business book, Good to Great. “We were curious to know what our customers thought we were worth. And what better way to find out, than to let them tell us,” explained PASTE President/Publisher Tim Regan-Porter. “While it’s certainly a bit unconventional, we also see it as a chance to get our product in the hands of people who could become lifelong fans. It’s been our experience that once people become familiar with PASTE, they turn into loyal readers,” added Regan-Porter.

Interested readers can order multiple subscriptions to PASTE, as long as there is a valid mailing address, so even gift subscriptions are encouraged. Each issue of PASTE also comes with a CD sampler.

Paste was voted “Magazine of the Year” by the PLUG Independent Music Awards for 2006 and 2007, and won the Grand GAMMA Award (along with 4 Gold awards and 1 Silver award) at the 2007 GAMMA Awards.