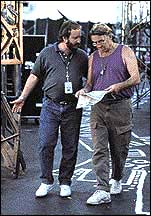 "I think it's the finest outdoor amphitheater in the Bay Area," Perloff told the San Francisco Chronicle. "It has incredible sound. It's centrally located. It's a historic venue."

Perloff presented his first event at the Greek while a student at Berkeley, which ultimately led to him being hired by industry impresario Bill Graham. "He understands the facility," Cal Performances Director Robert Cole told the Chronicle. "He knows what we need."

The Bay Area's two other amphitheaters are Clear Channel venues: the 22,500-capacity Shoreline Amphitheatre in Mountain View and the 12,500-seat Chronicle Pavilion in Concord.

"I believe that, in this environment, they (directors of the Greek) wanted a company that was local, that understood what the Greek Theatre was all about and would be working real hard to bring the best quality entertainment to the Greek,” Perloff said. “We don't have any other outdoor venues that compete with the Greek — it's our flagship and we're excited about it." — Bob Grossweiner and Jane Cohen