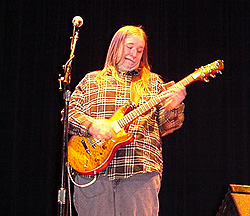 Currently touring the East Coast through late June, SYB will then spend a month
touring Italy before returning to the U.S. for a series of club and festival
appearances in late July and August. Among the acts SYB has opened for include
Trey Anastaio Band, Derek Trucks Band, Phish, John Entwistle, Ray Charles, BB
King and Gov't Mule among others.