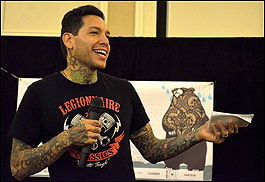 SAN DIEGO (Hypebot) – A few days post-wrap of the sixth annual San Diego music thing, the time comes to pose the question: What do Brett Andersen (The Donnas), Kim Gordon (Sonic Youth), Lol Tolhurst (The Cure), and Mike Herrera (MxPx) have in common? It's beyond their shared milieu of notoriety; and that they've since moved on to new or enhanced enterprises. They share one key likeness: they have known success, and they have known failure.

Though there was a time when eighth grade Brett Anderson practiced nearly every day in a basement, her days of negotiating film synchronizations from the local Denny's are long over. Although Anderson may not have known great failure in her career, this may be attributed to her entrepreneurial attitude from the beginning. In watching her father do business, she understood how to conduct marketing and financial negotiations from a young age.

As a part of her new project, Alpha/Beta, Anderson makes skillful use collaborations on a cross media level via tandem relationships with other bands. In teaming up with other musicians on a comparable level of financial resources and talent, Anderson has been able to make use of a variety of advantageous situations. For example, when Alpha/Beta joins forces with Alhambra locals Planets, they are exposing themselves to a new fan base. Regardless of the conditions Anderson finds herself in creatively, her dictum will remain to remember that, in the words of modern choreographer Martha Graham, "It is not your business to determine how good it is, nor how valuable it is, nor how it compares with other expressions. It is your business to keep it yours clearly and directly, to keep the channel open."

One common element Anderson shares with the remaining three is the capacity to appreciate the sacrifices one makes in going from a major label to an independent or self-releasing setting. Though Kim Gordon will assumedly never experience the complete shift from notoriety to the obscure due to her iconic status, her musical pursuits may. While Sonic Youth holds over a million "likes" on Facebook, her new project with Bill Nace holds little over two thousand. While this has nothing to do with the artistic credibility of the music, it perhaps could influence the amount of creative control she is able to maintain over her craft. Regarding Body/Head, she states "It was the most free, fun thing I could think of doing. If you do one thing for thirty years, you get tired of it, and you want to do something else."

Toward the end of Gordon's talk, she was asked for her thoughts concerning the amount of "noise" in the current industry versus the amount when Sonic Youth was just starting out.

"It's just different. People growing up now, they don't know anything different than this. The biggest thing that can be kind of disturbing is that there's no context for anything. Everything is just kind of out there. There aren't really any more music genres…it's all been broken down. The lack of history is kind of unfortunate, because there's no context. There's access to a lot of stuff, but what does it all mean? It seems to be increasingly important to give context."

In listening to Lol Tolhurst the following day, it became very apparent that he shares Gordon's sentiments. Early on, The Cure largely separated themselves from the public in order to refine their craft – for three years. A thousand days is an eternity in terms of the modern industry, yet according to Tolhurst: "You need to isolate yourself. You need to put yourself in the position where you can hone what is you do…It's like hearing Kim Gordon speak yesterday – there's a lot of bands coming out because you've got the internet, so everything is available, but there's very little context for it. I think that's true. You have to work out your context, who what you stand for, who you are, and how you're going to present yourself. And that takes time-it doesn't happen in one weekend and you say 'Okay,' this is who you are. You've got to work it out."

To sum up the weekend, the theme truly was plans within plans. Mike Herrera is an ideal example of an artist who has made a career of rolling failure into success. He's come a long way from the construct of his high-school dream (to tour the world with his humble band from Bremerton, Washington). In speaking to the reasoning behind MxPx's ninth studio album title (Plans Within Plans) he explains the following:

"It's about setting goals, and not going back on those goals. But it's so much more than that-it speaks to the idea that we can accomplish huge things by shaving off little chunks, setting small goals, and making those small goals work. It may never, ever turn out the way you think it will, but being open to learn, positive feedback loops… you feel so much better once you start building that sort of repertoire of actually following through with your plans, that it just makes it easier every time."

For Herrera as a songwriter, it's not just about writing songs. It's about getting creative on the road to success, as well as devotionally documenting his ideas in a companion notebook that doesn't leave his side (unless it's stolen in Tijuana). He states, "We have to do things everyday to make ourselves better at what we do. Get it. Make it happen. Be a guru of what you do. Be an expert. Be a professional at whatever it is you're doing."

In today's business, this can be a lot of things – many of which musicians aren't paid to do. Whether it's relentlessly pursuing bookers and managers to land you that one coveted opening slot, or washing dishes for six months to fund your LP, musicians must be creative on and off the stage. In an industry flooded with more bands than ever, passively floating by and holding on to a hope is not going to cut it. Herrera goes on to remark "If you can't find that joy, get out. Don't do it. I'm not saying it's easy to quit your job and do whatever is you want to do. I'm saying think about it, and figure out 'This is my main goal…If you're working everyday towards it, you can make it happen."

Regarding success and failure, Herrera reminds us that the daunting journey to doing what we love can appear hopeless, and it can be devastating, but there is value in misery. In the words of Charles Bukowski, "As the spirit wanes, the form appears." He leaves us with these parting thoughts: "Maybe you didn't start out executing exactly what you thought you would, and arrive at the conclusion you thought you would, but you're always going to end up somewhere, and you need to make that your success. You can't always dictate where life takes you. You can't plan everything. So Plans Within Plans being my idea…the big plan shouldn't change too often, but the little plans change every day; constantly. It's a matter of tackling each thing, and making it happen. Defining success for yourself is so important because you can't say that what's good for you is good for everybody. You've just got to define for you what it is you're looking for, what it is you're going for, and that's what you work on. How you get there is the most important thing. It's not where you are; it's how you're getting there, and it's where you're going."