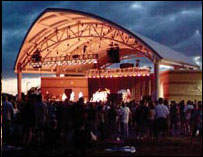 OSHKOSH, WI (CelebrityAccess MediaWire) — PMI has opted not to renew its contract, to promote at the Leach Amphitheater in Oshkosh, WI. and city council members have obligingly suggested that they would be willing to let PMI out of the pact before the end of 2008 when it is set to expire.

According to the Northwestern, Oshkosh Mayor Frank Town has said that if they do get an early release, that it would be unlikely that a new firm would be contracted to promote at the venue in the near future.

"I think what you might see happen is some type of hybrid, because any booking entity will tell you you've got to book well in advance based on routing and what acts are coming and how you could facilitate making the best bang for the buck," Tower told the Northwestern.

Others have more direct plans. Council member Paul Esslinger, who first broached the idea of an early release thinks that a contract with a new entity, Joe Ferlo, the Exec. Director at the nearby Grand Opera House who has expressed an interest in taking over programming duties. Ferlo has stated that he can't commit to the full 2008 season but would be interested in taking over full-time in 2009. Eslinger thinks that the city should give PMI a six-month notice of intent and then "force them out" if necessary, paving the way for Ferlo to take over.

PMI on the other hand, has taken an all or nothing approach. Ken Wachter, PMI's president has stated that PMI would not be willing to program the amphitheater for a partial season. They will either live up to the full terms of the contract until 2008 or they would like to be released entirely.

PMI has been looking for the out from the Leach after mounting financial losses. The Northwestern reported that they racked up $25,744 in red in 2008. – CelebrityAccess Staff Writers