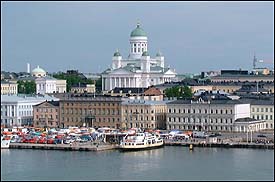 According to a report in Audience Magazine, the city has shows are on the books at atypical venues around the city, including Guns n' Roses at Käpylä sports park, Green Day at the ex-harbor at Kyläsaar and Pink at Kaisanniemi Park.

Live Nation Finland and Eastway also teamed up to produce Arcade Fire at Senate Square on June 28th. Situated in the heart of Helsinki, the square can accommodate 4,500 people.

"The band were looking for a special venue and Senate Square is definitely a beautiful space." Live Nation Finland's Scott Lavander told Audience. "We have worked with Eastway before and they have history working with this site so it made sense to team up with them." – CelebrityAccess Staff Writers