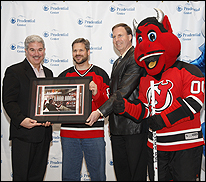 NEWARK, NJ (CelebrityAccess MediaWire) — Five months after opening, Prudential Center reached a major milestone on Friday, March 28 when it welcomed its one millionth fan before the New Jersey Devils hosted the Philadelphia Flyers. Mark Hoffacker, a New Jersey native and Georgia transplant, flew into Newark to watch his first game in the new building and became the one millionth person to walk through the doors at Prudential Center.

Greeted by President & Chairman of Devils Arena Entertainment Jeff Vanderbeek, General Manager Dale Adams and Prudential Center staff, Hoffacker was presented with a large commemorative ticket, a hockey stick signed by New Jersey Devils team captain Jamie Langenbrunner and upgraded club level seats at center ice. After interviews with regional TV stations, Hoffacker and his guest were treated to dinner in the venueâ€™s Restaurant and he was featured on several segments of the gameâ€™s broadcast on MSG Plus.

â€œIt is a great accomplishment for a building this young to have one million visitors in such a short period of timeâ€, said Adams. â€œItâ€™s an honor for us and testament to this city that so many people have chosen Prudential Center for a convenient and exciting sports and entertainment experience.â€

Prudential Center is the first new, state-of-the-art facility built in the New York/New Jersey metropolitan area in over 25 years. It is the home of the NHLâ€™s New Jersey Devils, NCAA Division I Seton Hall menâ€™s basketball and the New Jersey Ironmen of the MISL. – CelebrityAccess Staff