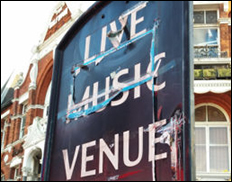 (Hypebot) – Although such a statement might seem outrageous, the fact that these multiple genres are not considered music is actually beneficial, meaning small venues are exempt from paying a "fine arts" tax, although it hasn't stopped some tax officials from demanding back payments.

When it comes to the issue of “fine arts,” rap, country, rock and DJ-based music are not considered real music in Chicago, and believe it or not, that’s actually a good thing. Small venues that hold 750 or less in Cook County aren’t subject to a 3% admission fee tax because what goes on in the venues isn’t covered as music under the Fine Arts part of the tax code.

That hasn’t stopped tax officials from demanding back payments of the taxes though, and has only added to the extra pressure that small venues there face in staying open.

New legislation by county commissioner John Fitchy is now being proposed that will hopefully clear up the situation, however. The amendment to the tax law clarifies what qualifies as music, but exempts the genres from the tax code, taking pressure off the venues should it pass. One thing it doesn’t do is exempt venues from back taxes, but the commissioner has sent a letter to the tax board asking tax collectors to stand down from trying to collect any back taxes from the venues.

All over the world, music venues are under siege, especially in the big cities. Although taxes are a part of doing business, an unexpected large tax bill could easily push a venue to close, especially when so many are struggling to survive as it is. Rising real estate prices and sometimes harsh police tactics and building code laws makes you wonder why anyone would even want to open a club these days, and in fact, so many classic venues have closed when up against these new realities.

That said, some large cites (Chicago and London for example) are now recognizing that a thriving music scene is essential for a thriving nightlife, which only bolsters a city’s culture and desirability. Let’s hope that other cities make a similar move to help real music venues not only survive, but flourish.