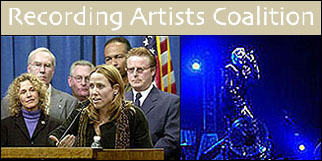 "Recording artists sign these contracts in good faith fully intending to honor them. But the record companies know from experience that it is highly unlikely artists will be able to fulfill their requirements due to the demands they place on the artists, including touring, video shoots and other marketing chores," said Dexter Holland, lead singer of Offspring. "The labor code which exempts artists from the 7-year rule must be repealed to level the playing field and make it fair for everyone."

The Recording Artists Coalition's on-going purpose is to form a non-partisan coalition to represent the interests of recording artists in legislative issues where corporate and artists' interests conflict and address other public policy debates that come before the music industry.


Earlier this week (January 23), RAC and American Federation of Television and Radio Artists, AFL-CIO (AFTRA) and American Federation of Musicians (AFM) members converged on Sacramento, calling on legislators to support Senate Bill 1246 legislation to repeal California Labor Code Section 2855, subdivision B, because it unfairly excludes recording artists from the same protection of law afforded all other working persons in California who sign a personal services contract. They lobbied for the repeal of the former amendment to the state's "seven-year" statute which amendment exempts musicians from the seven-year limit on entertainment contracts. RAC members Don Henley, Carole King, John Fogerty, Beck, Stevie Nicks, Ray Parker, Jr., Sheryl Crow, the Deftones, Paul Doucette (Matchbox Twenty), Tom Morello (Rage Against the Machine) and Dexter Holland (Offspring) were all on hand.