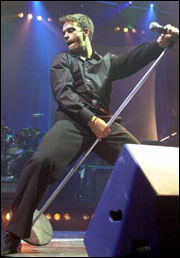 The tour which will take place next summer will see him play for a total of nearly one million people in the following countries: Scotland, Austria, Germany, Holland, Denmark, Sweden, England and Ireland.

The tour includes two mega shows at Knebworth where Robbie will be looking to break Oasis sell out record of 250.000 for 2 shows in 1996.

His new album 'Escapology' was also released yesterday to much anticipation.