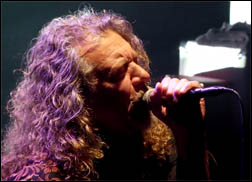 NEW YORK (CelebrityAccess) — Former Led Zep frontman Robert Plant announced that he and his current band, the Sensational Space Shifters would be hitting the road in 2015 for a tour of North America.

Set to kick off on May 24, at the Sasquatch! Festival in George, WA, the tour includes his return to Bonnaroo the weekend of June 12, and will conclude on June 17 in Philadelphia, PA, at the Mann Center.

The tour is in support of Robert Plant's lullaby and… The Ceaseless Roar, which was released September 2014 on Nonesuch/Warner Bros. Records. The record was named one of the top 50 albums of the year by NPR, which said, "At 66, the singer is still a majestic rock presence, at peace with the legacy of his hard-rock-defining band Led Zeppelin, while remaining relentlessly creative in his solo work. But on his 10th solo album, Plant does pause by those waters to consider the aesthetic, emotional and spiritual currents that have shaped his illustrious life. He finds himself, characteristically, not saddened but renewed… Not one of these songs sounds precisely like its source; that's the genius of this album. It lovingly layers elements in ways that mirror memory, creating new constructs from floating shards of the musical past."

The Robert Plant and The Sensational Space Shifters 2015 tour dates are below: