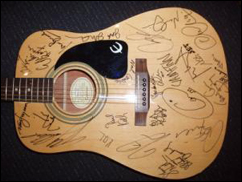 MELBOURNE (CelebrityAccess MediaWire) — After three weeks of intense bidding the Rockin’ Relief for the RSPCA Victorian Bushfire Appeal – an initiative by The Frontier Touring Company and bwired in conjunction with the RSPCA Victoria – has ended, with close to $40,000 raised.

Rare money can’t buy items, tickets and memorabilia were hotly contested with all items being snapped up by avid fans. An autographed Gibson guitar, signed by the majority of bands who performed at Sound Relief Melbourne went for a cool $3000, while a Billy Joel autographed harmonica sold for $1230. In total 99 auction items raised $39,661.

All of the money raised will be used by the RSPCA (Victoria) in the bush fire recovery fund which is providing ongoing financial assistance for: