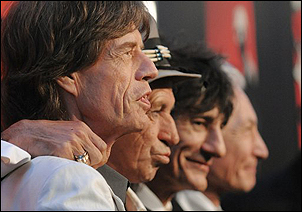 NEW YORK – (CelebrityAccess MediaWire) — After months of speculation and rumor, The Rolling Stones have finally departed from their long-term label home at EMI and taken up with Universal Music Group under a new long-term recording contract.

The deal encompasses both future recordings by the iconic rock band and the real prize, the band's extensive back catalog; which includes albums such as "Sticky Fingers" and "Exile on Main Street" as well as signature tracks such as "Brown Sugar," and "Start Me Up."

All of the band's future recordings will be issued on UMG's Polydor label. UMG is also planning on a extensive campaign to reposition the band's back catalog for the digital era and the contract includes provisions for both digital and physical rights.

"There is no question that the Rolling Stones are one of the most important bands in music history," stated Doug Morris, Chairman and CEO of UMG. "Their musical style and off-stage swagger have been emulated by countless others. Having worked closely with them during my days at Atlantic Records, I am thrilled to be reunited with these seminal musicians who have set the bar for all rock bands in their paths. I couldn’t be happier that they’ve chosen UMG as their partner for what will certainly be the next chapter in their already storied career."

The Stones commented, "Universal are forward thinking, creative and hands-on music people. We really look forward to working with them."

The departure of the Rolling Stones, one of EMI's signature bands and a fixture at the label for more than 20 years, is a major blow to the label which was acquired by a private equity shop Terra Firma last year. Since Terra Firma took over, EMI has lost a number of high profile artists, including Radiohead and Paul McCartney and other artists such as Coldplay and Robbie Williams have appeared increasingly restive.

Since the acquisition in 2007, Terra Firma has struggled to return EMI to profitability and in the process, shed thousands of employees in recent months, thus the loss of the rights to the Stones lucrative back catalog will likely not be a positive indicator for the troubled label future success. Forbes has put the Stones at the top of their list for artists earnings and reported that the group picked up a cool $88 million between June 2006 and June 2007, largely as a result of their "Bigger Bang Tour."

That the Band was pondering a move to Universal has been a poorly-kept secret and been a popular point of discussion for industry bloggers in recent weeks. Although some had speculated that a Live Nation deal similar to the ones struck by Madonna and Nickelback in recent months may be in the offing, most observers opined that Universal would be the band's ultimate destination. In March, UMG released the soundtrack to Martin Scorsese's Rolling Stones documentary, "Shine A Light." – I. Courtney