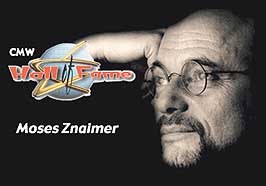 "Rompin' Ronnie has been the soul of popular music in this country for so long that it's about time he was recognized as being the real hero of Canadian rock 'n roll that he truly is," said Neill Dixon, president of Canadian Music Week (CMW).

Involved with the music business for almost three generations of Canadian rockers, many of whom he supported and played with, Hawkins is a Canadian icon, JUNO Award winner and the recipient of the Walt Grealis Special Lifetime Achievement Award as CARAS' Industry Builder. Made famous by his version of 'Mary Lou' in 1959, Hawkins helped tear down the Berlin Wall in 1992 playing with The Band, performed at Bill Clinton's 1992 inaugural party and has also become an accomplished actor hosting his own television show 'Honky Tonk' in the early '80s and appearing in such films as 'Heaven's Gate' with Kris Kristofferson and 'Hello, Mary Lou: Prom Night II'.

"It's the greatest honor that can ever happen," Hawkins said when told of his Hall of Fame induction. "This'll make my grandkids think I must have been a somebody."

<{> West created Distribution Fusion III in 1983 with an eclectic roster, everything from a language teaching label to a world music label called Lyrichord Records. He started his own label, Justin Time Records in June 1983, and there was no stopping from there. Justin Time has released some 350 albums over the years with its most famous artists including Diana Krall (who West discovered), Oliver Jones, Ranee Lee, the Susie Arioli Swing Band, and the Montreal Jubilation Choir. The label and its artists have earned many Juno, Felix, Jazz Report and Choc awards over the years. In 1990, Justin Time launched the Just A Minute label, a subsidiary devoted to unique reissues and previously unreleased titles. Jim West is the chairman of CIRPA and FACTOR and is also a board member of the Canadian Association of Recording Arts and Sciences (CARAS).

Commenting on the honour bestowed on West, Dixon said, "There are few people in this country who have made such an enormous contribution to the Canadian recording industry and to the development and nurturing of some unique talents."

"It's a great feeling to receive this award and be honoured by your peers," said West. "To be a part of the Canadian record industry is very fulfilling and I'm extremely proud to play a small role in it."

“It’s important to recognize and admire the exploits and excellence of our Canadian heroes – and Moses Znaimer certainly qualifies through his trailblazing work in broadcasting, communications, and yes – this country’s music business in particular. There’s no question this honour is long overdue,” said Dixon.

A renowned maverick of the broadcast industry for over 30 years, Znaimer is the co-founder, former president and executive producer of many Canadian television entities – most notably Citytv, MuchMusic, Bravo!, etc. Presented with the Canadian Association of Broadcasters’ 1998 CAB Gold Ribbon, Canadian private broadcasting’s highest award to an individual, Znaimer has been the recipient of several awards for his work within the world broadcasting community. Currently, Znaimer provides advisory services to CHUM Ltd. and assists with the company’s international business development in addition to continuing his personal projects that include the ideaCity Conference and the MZTV Museum of Television.

"Over the years, I've always resisted this sort of thing,” said Znaimer. “Too soon, I thought, and too conventional. Now it seems more appropriate to look back and take stock. So I'd like to thank Neill Dixon and the CMIHOF for their persistence and for placing me on the same programme as Rompin' Ronnie, a genuine Canadian Music Legend, and Jim West, one of those behind the scenes stalwarts, without whom, things just don’t happen." –Bob Grossweiner and Jane Cohen