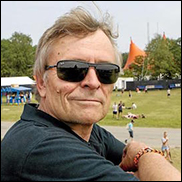 
"I have made my decision, because I believe that the time is right. Today we have a strong organization and management, we are well on the way with developing our other business areas and we have optimized the festival, so it is well prepared for the future in a competitive market.


As said many times, I believe that the last two festivals have been among the very best ever. So I feel confident in passing the leadership on, says Henrik Rasmussen, who has been part of management since 1986 and was the festival`s first full time employee."


Henrik Rasmussen will continue in his current role until January 1st 2017, leaving the board plenty of time to find his replacement.


Chairman of the board at Roskilde Festival Steen Jørgensen added "Henrik Rasmussen`s decision to stop is a natural step in the development process we have worked on. It is therefore not entirely new for us on the board and we have great understanding and respect for his decision, although it is with some sadness that we have accepted it.


Henrik has been in the top management of the Festival group for 3 decades, so one could say that it is the end of an era but it also reflects an organization that is developing, and we fully agree that the organization is well prepared for a change, not least thanks to Henrik"