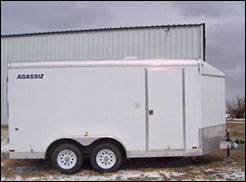 LEVAL, Quebec (CelebrityAccess) — Winnipeg-based indie pop group Royal Canoe announced that they had $82,000 worth of gear stolen from them while on tour.

In a post on Royal Canoe's Facebook page, the band said their gear was stolen in the Montreal suburb of Laval, Quebec.

"Everyone! Our trailer was stolen in Laval/Montreal this morning. Here is a picture of the model of trailer from the internet, Montreal please share! License plate Z063G. If anyone sees our trailer please call the police. This is so devastating for us, it's every bit of musical gear we own. It had a hitch lock and we were in a well lit hotel parking lot, thieves must had tools to cut the metal. Feeling all sorts of emotions right now. Please share to help! (Liking as well, whatever gets this message out)," a rep for the band said on their Facebook page.

The band also posted a list of the missing gear, including pictures to help in locating it.

Following the robbery, Royal Canoe canceled their Oct. 26th show with The Belle Game at L3 Nightclub in Saint Catharines. As of now, subsequent shows including Lee's Palace in Toronto on Oct. 27th and the following night at Zaphod Beeblebrox in Ottawa are still on, but contingent on securing replacement gear.

"We are working over the next 72 hours to buy/rent/gather as many piece of gear as possible to make this show happen. Playing music for all you wonderful people on Thursday night is the light at the end of the tunnel," A rep for the band said in a reply to a fan asking about the status of the show. – Staff Writers