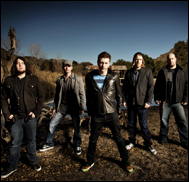 ARLINGTON, VA (CelebrityAccess MediaWire) — Rock band Saving Abel teamed up with the USO for a weeklong USO/Armed Forces Entertainment tour in the Persian Gulf. Busy visiting and performing for troops in Qatar and Kuwait, Saving Abel has entertained more than 3,500 troops so far and just finished filming their USO show at Camp Arifjan. Footage from the hi-energy USO show will be broadcast in early March with help from Ustream.

As part of their eight-day, three-country USO tour to the combat zone, Saving Abel will visit eight military bases and perform seven concerts. Known for their radio-ready sound, memorable melodies and hard-hitting tracks, the band will also sign autographs, pose for photos and spend time with soldiers.

Having entertained 1,750 troops in Kuwait, the group filmed their USO show at Camp Arifjan on February 23 and will provide viewers with an exclusive behind-the-scenes look of USO entertainment in early March. With the help from Ustream, the concert will be picked up by MySpace, Facebook and other social networking sites, and is dedicated to America’s armed forces and their families.

This is Saving Abel’s first USO tour. The band has been eager to travel overseas for quite some time and have made multiple appearances on bases stateside.

Avid supporters of the U.S. military, Saving Abel performed for troops in October ‘08 as part of MTV’s "A Night for Vets: An MTV Concert for the BRAVE." Performing alongside such USO veterans as Kid Rock and Ludacris, the concert called for elected officials to provide veterans with better health care, mental-health treatment, job opportunities, housing assistance and compensation for serving longer due to stop-loss orders.

Known for such songs as “Addicted," 18 Days,” “Drowning (Face Down)”, Saving Abel was formed in Corinth, Mississippi in ’04.