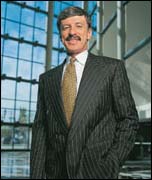 UK (CelebrityAccess MediaWire) — The London Observer is reporting that American billionaire Stan Kroenke is attempting a takeover of Arsenal, the latest in a series of business moves that could result in half of the Premiership being in American hands by the end of the year.

Stan Kroenke is different from other Americans who have bought into Barclays Premiership clubs: he knows something about “soccer”. Unlike the Glazer family, the owners of Manchester United, and Randy Lerner, of Aston Villa, he already has a soccer team, the Colorado Rapids, in his portfolio. However, he shares Malcolm Glazer’s reluctance to speak in public, which has earned him the nickname “Silent Stanley”.

UK’s ‘Times Online’ reported that Arsenal is only the latest team in which Kroenke Sports Enterprises has an interest. When Kroenke bought 9.99 per cent of the club two weeks ago, and secured a 50 per cent stake in Arsenal Broadband Ltd, he said that he was excited about joining “the Arsenal family” but it may be nearer the mark to suggest that it is the club themselves who are joining the Kroenke family. As well as the Rapids, their newly adopted siblings include the St Louis Rams of the NFL, the Denver Nuggets of the NBA and the Colorado Avalanche of the NHL.

However, despite the breadth of Kroenke’s holdings, his interest in sport is genuine, although it does not hurt if there is a potential profit, especially in his main interest, property. He bought the Rapids from the AEG group, which owns the Los Angeles Galaxy and a number of other teams, in 2003, and this season they will be playing at one of a small number of soccer-only stadiums, Dick’s Sporting Goods Park, which he co-developed. Like the Galaxy’s Home Depot Center, it is also surrounded by pitches available for youth football.

The first links between Kroenke and Arsenal came this year through the Rapids, when the clubs set up a marketing agreement described as an “innovative strategic relationship”, which was followed by the purchase of the 9.99 per cent shareholding from Granada TV.

Enos Stanley Kroenke, 59, is named after two former St Louis Cardinals baseball players, Enos Slaughter and Stan Musial, which suggests that a Major League Baseball team will eventually come his way. He has a personal fortune of around $2 billion (about £1.02 billion), acquired through construction of shopping centers, retail, business and residential developments. His wife, Anne Walton, is also wealthy — a member of the family that owns Wal-Mart. Once Kroenke had access to land adjoining Wal-Mart stores through their marriage, he quickly set about developing it.

For all Kroenke’s wide-ranging interests, he is very much a Missouri man. He was born in the state; he holds an MBA from the University of Missouri and built up his fortune in and around St Louis, while the Rams did not come under his ownership until they relocated from Los Angeles. However, once he was involved, they became winners, taking their first Super Bowl title in 2000.

His other main sphere of operations is Colorado. In 2000 he became the owner of the Nuggets and the Avalanche, who won the NHL’s Stanley Cup under his stewardship in 2001. Two years later, he formed a partnership with Pat Bowlen, the owner of the NFL’s Denver Broncos, and John Elway, the team’s two-time Super Bowl-winning quarterback, to become co-owner of the Colorado Crush of the Arena Football League. The Rapids, along with Colorado Mammoth of the National Lacrosse League, joined the fold in 2004.

All his Denver-based teams appear on his cable channel and tickets for their games are available through his ticket agency. And guess who owns Denver’s Pepsi Center, where the Avalanche, Crush, Mammoth and Nuggets play?

Chairman Peter Hill-Wood says that the Arsenal board is preparing to meet and discuss with Stan Kroenke his intentions with the club.

Hill-Wood had only, last week, said that the board was not interested in selling to Kroenke, who currently owns 12.19% of the club.

But Hill-Wood has since backtracked on his comments, and said that the board would now be meeting with the American.

In a letter to shareholders yesterday, Hill-Wood said: "Our managing director, Keith Edelman, has already had one meeting with Mr. Kroenke since his investment, and I myself have spoken to him recently to arrange a meeting so that I can hear what he has to say."