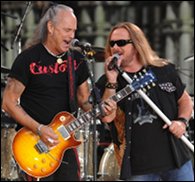 LAS VEGAS (VIP NEWS) — Lynyrd Skynyrd are getting their own restaurant in Vegas.

Not only can Lynyrd Skynyrd pound out songs like Sweet Home Alabama and Free Bird, they can evidently also market some beer and bar-b-que.

Lynyrd Skynyrd BBQ & Beer will open this fall at the Excalibur Hotel & Casino in Las Vegas. The restaurant is the concept of Michael Frey and Craig Gilbert of Drive This! Entertainment, the team behind such classic Vegas venues as RHUMBAR and Tacos & Tequila.

The idea behind the new venue is to "quite simply…rock the house. As guests walk in they will immediately be transported to a setting reminiscent of Hell House, the ram-shackled structure in the backwoods of Jacksonville where the Skynyrd sound originated. The decor will consist of collectible items, from original album covers and guitars hanging on the wall to never-before-seen artwork and band pictures. The center of the action will be the concert stage featuring a variety of cover bands and musical acts, including special performances from the legendary band throughout the year.

Each night the enthusiastic bar staff will get the house swinging and singing by hopping up on the bars and stage, leading spontaneous sing-alongs to mash ups of classic Skynyrd songs, such as What's Your Name and Gimme Three Steps.

Gilbert said of the new venture "Paying homage to the venue's famous namesake, Lynyrd Skynyrd BBQ & Beer will embrace the band's unique spirit and the lifestyle it so proudly defined. We are honored to work with the rock legends to not only create a much-needed, authentic BBQ spot, but also a place for people to immerse themselves in an eclectic blend of rock, country and blues music."

Renee West, president of the Excalibur, said "Bringing the first and only Lynyrd Skynyrd BBQ & Beer to Excalibur is exciting and will provide our guests with an exclusive, fun experience courtesy of one of the best bands of all time. From incredible sounds by rock star legends, including impromptu performances by Lynyrd Skynyrd throughout the year, to delicious food and drinks, this is a high-energy hotspot that will bring a new form of entertainment to the Las Vegas Strip."