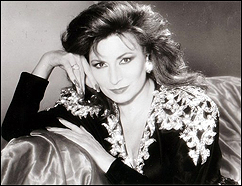 MADRID, Spain (AP) — Rocio Jurado, a singer and actress who was a beloved figure in Spain and Latin America over a career spanning more than four decades, died Thursday after a two-year battle with pancreatic cancer. She was 61.

Jurado's death was announced by her brother and agent, Amador Mohedano, outside Madrid.

Jurado was hospitalized in Madrid after returning to Spain in late March after two months of cancer treatment in Houston. She was first diagnosed with cancer in 2004.

A feisty Andalusian women with feline eyes and flowing reddish hair, Jurado was known fondly as "la mas grande de Espana" — Spain's greatest. She recorded more than 30 records, performed on both sides of the Atlantic and appeared in nearly a dozen films — her first as a teenager. In 1985, she performed at the White House for then-president Ronald Reagan.

While living in Argentina, she performed in a play called La Zapatera Prodigiosa, based on work by Federico Garcia Lorca. After teaming up with composer Manuel Alejandro, she became a huge hit on the Latin music scene and acclaimed throughout the United States.

Her overseas concerts include shows at the Kennedy Center in Washington, D.C., Madison Square Garden in New York and Beethoven Hall in Bonn, Germany.

She won a slew of awards over the course of her career, including album of the year in Spain in 1980 and 1985 and various other honors in Venezuela, Mexico and the United States.

In early April, shortly after Jurado was hospitalized in Madrid, the Spanish government approved a decree awarding her a "Gold Medal for Merit in Work," hailing her as "one of the best voices in our country" and a star in both music and film.

It noted she had five platinum records and about 30 gold records, and said she was "one of the most brilliant folk singers of the last 50 years."

Jurado was first married to a world-champion boxer, then to a well-known bullfighter, jetting back and forth from her mansion in Madrid and ranch in Seville.

A street, plaza, statue and golf course have been named after her in her hometown of Chipiona in Cadiz province, where she will be buried. Her body is to lay in wake at a Madrid cultural center for an unspecified period before being sent to Chipiona.