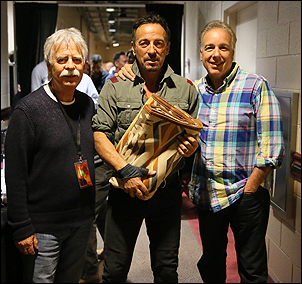 UNCASVILLE, CT (CelebrityAccess) — Bruce Springsteen and the E Street Band closed out the final two nights of their High Hopes Tour at the Mohegan Sun Arena on May 17 & 18.

The tour, comprised of thirty four shows, was in support of the band's 18th studio album "High Hopes" and featured Rage Against the Machine guitarist Tom Morello, standing in for Steven Van Zandt, who was taking some time off for a television project.

The tour kicked off on Cape Town, South Africa on January 26 and included four additional dates in South African, followed by a spin through Australia and New Zealand before returning to the states, grossing more than $64 million by the time the final curtain came down.

The final two dates on the tour were both at the Mohegan Sun Arena, the smallest venue on the entire tour, with a capacity of just 10,000. Playing to standing room only crowds on both nights, The Boss and the E-Streeters performed some rare gems, including the show opener, "Racing in the Street '78", Seven Angels", "Don't Look Back" and a performance of "Santa Claus is Comin' to Town" before closing out with "Jungleland", a song, which, since the passing of long time band member Clarence Clemons has been rare in live shows.

As well, the crowd was treated to the surprise return of guitarist Steven Van Zandt, who had been on hiatus for much of the tour while filming the Cinemax crime drama Lilyhammer.

CelebrityAccess took a few moments to talk to The Mohegan Sun's Senior Vice President of Sports & Entertainment Tom Cantone about the show.

Bruce Springsteen closing out his tour at the Mohegan Sun Arena is quite a coup. Can you talk a little about how the shows came to fruition?

Well it took me 30 years to finally get him here but it was worth the wait. We had made many offers over the years and I think the timing was perfect this time. Our venue has won Arena of the Year twice this past year and it's now ranked among the top elite venues in the world.

The show, being the final date of the tour, and a smaller venue, made it a pretty hot ticket. How quickly did the show sell out?

The two Springsteen shows sold out in 19 minutes. We had people fly in from all over the world, as far away as Europe, and in the U.S., people flew in from Vegas, LA , Dallas, New Orleans — all over the country. Since these were his very last two shows on the tour, we were the final place to see him for some time. Our hotel was sold out for months, and all the area hotels had no rooms anywhere. It was the hottest ticket on the entire tour.

The Mohegan Sun Arena is admittedly a little smaller than the venues that Springsteen typically plays. How much did that factor in?

Everyone said it would be a better and more intimate experience than the larger rooms and they were right. This was the smallest arena he has played and he loved the closeness to his fans. Almost 10,000 a night had a chance to really get close to one of Rock's musical iconic names. I spoke to him before his last show and he was loving Mohegan Sun.

Springsteen and the E Street Band comes with quite an ensemble of musicians. From a technical standpoint, did the show present any unique challenges for your team at the arena?

Not at all, we are blessed with a seasoned in house running crew, the best in the nation. The men and women on the ground make things happen behind the scenes as an extension of the national tours. It's what separates us from all the rest. It's the reason everyone who's never played here, and there aren't too many left, want to come back.

Springsteen may be one the preeminent performers in the modern music scene. Where do you go from here – who would be another dream artist you'd like to see play the Sun?

We have a standing offer into Sir Paul McCartney. That would be for me, a ticket to ride off into the sunset.

Any shows on the horizon that you'd like to talk about?

Our summer lineup once again is on a record sellout pace. So far 22 sell outs, all A List names like Timberlake, Katy Perry, Cher, Lady Gaga, to name a few.