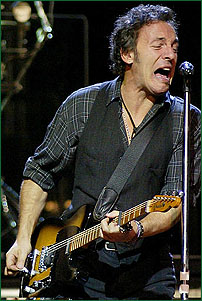 A concert in Manchester by Bruce Springsteen has been cancelled after more than 50,000 tickets were sold.

The open-air event featuring the singer-songwriter, known as The Boss, was due to take place at Old Trafford cricket ground at the end of May.

But the council in Trafford threw out a licence application for the show after problems with previous concerts at the ground – home of Lancashire County Cricket Club.

Promoters of the show have got three weeks to appeal against the decision or face refunding disappointed fans.

Leaders of Trafford Borough Council's licensing committee said nearby residents had complained about noise and crowd problems during previous shows.

The complaints reached their peak during last year's concerts by Manchester favourites Oasis.

"In reaching this decision, councillors were advised of the problems experienced during several previous concerts at the cricket ground," he said.

"Although several areas of the management of each of these concerts worked well, there were still serious problems relating to the environmental impact on local residents."

He said overall impact on residents was also likely to be greater since the concert was scheduled for 29 May, a day after the Uefa Champions League final at Manchester United's nearby Old Trafford ground.

Springsteen was due to play one night in Manchester and two concerts in London as part of his latest European tour.