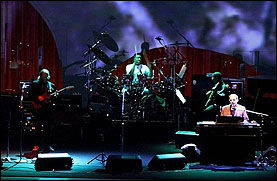 NEW ZEALAND/AUSTRALIA (CelebrityAccess MediaWire) — "What ‘Sgt. Pepper’ is to the Beatles, Steely Dan is to Rock music, an Everest towering over everything else. They put lyrics on a par with literature and married rock with the virtuosity of jazz. It was never "mere" music, and has never been performed by "mere" musicians." – Ed. Nimmervoll, music writer.

The Frontier Touring Company are delighted to announce that jazz-rock icons Steely Dan are confirmed to tour Australia and New Zealand for the very first time with a series of indoor arena concerts and A Day On The Green winery dates.

The Grammy Award winners and Rock And Roll Hall Of Fame inductees defined the 70s for a generation of music fans with hits such as ‘Reelin’ in the Years’, ‘Do It Again’, ‘Rikki Don’t Lose That Number’, and ‘Peg’ enduring FM radio staples.

In 1980 they released Gaucho, which delivered the hit single ‘Hey Nineteen’. In 1981 the band announced their breakup, with Becker and Fagen both focusing on solo projects until they reformed Steely Dan in 1993, touring the United States and internationally to widespread acclaim over the ensuing years.

In 2000 they released their first studio album in twenty years Two Against Nature, which went on to earn them a massive four Grammy Awards in 2001, beating controversial rapper Eminem for the coveted Album Of The Year Award. Later that year Fagen and Becker were inducted into the Rock And Roll Hall Of Fame and in 2003 released Everything Must Go.

Now, an impressive 40 years on since they first met, Walter Becker and Donald Fagen are finally confirmed for their debut tour of Australia and New Zealand.

Promoter Michael Gudinski said he was thrilled when he heard the band were considering Australia and New Zealand as a tour destination in 2007.

"Steely Dan are absolute legends and I’m so excited that they’re finally touring here. I’ve been trying to get them here for so many years,” Michael said of the tour announcement.

"I honestly think fans in Australia and New Zealand won’t believe it when they first hear they’re coming. This is just huge news.”