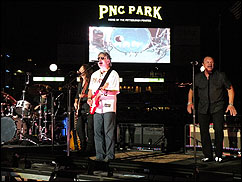 Miller and his band performed on-field after the July 24th night game vs. the San Diego Padres at PNC Park. The show was booked and produced by Select Artists Associates and included for Pirates fans with the price of their admission to the game. Miller also conducted a meet & greet, sang the National Anthem, threw the first pitch for the game and appeared in two television interviews while at the stadium.

The concert proved to be a popular event and the SMB performed to a standing-room-only crowd of over 40,000 fans.

2010 marks the 5th year that SAA has been working with the Pirates organization to bring after-game concerts. Upcoming performers for this year include George Thorogood on August 7, Country newcomer, Luke Bryan on September 4th; and OAR makes their second Pirates Post Game Concert Appearance in as many years on September 25th. – CelebrityAccess Staff Writers