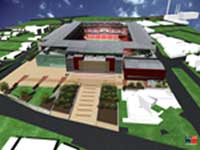 New management appointments to the stadium, which is anticipated to open May 2003
are: Operations Manager – Rick Davis, most recently general manager of the Newcastle
Entertainment Centre; Asset Manager Nigel Harris, with more than 17 years experience
in project management, architectural and interior design and technical services
throughout the Asia Pacific region; Project Co-ordinator Rob Camping, most recently
project manager for the $100M Liverpool Arena in Sydney and the $US300M
redevelopment of the Seahawks Stadium in Seattle; Business Manager Brent Blackman
has held the same position at Ogden IFC's Brisbane Entertainment Centre since
1998.

"Suncorp will become Queensland's 'own' stadium through a combination of first-class
events in a modern and exciting venue," said Suncorp Stadium CEO Geoff Donaghy.
"We aim for patrons to go away from the stadium knowing what they have experienced
is as good as anywhere in the world."