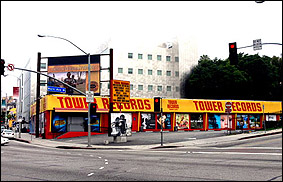 LOS ANGELES (CelebrityAccsss MediaWire) — The building which was formerly the Sunset Strip home to Tower Records is facing a date with destiny.

The building is currently scheduled for demolition to make way for a multi-million dollar office and retail complex, despite the best efforts of a group of preservationists who are striving to get the site placed on the list of "historic resources," the Los Angeles Times reported.

An application pursuant to this end, submitted by a group of said activists was rejected because by the city because it contained color photographs instead of the black and white images stipulated by regulations.

The Chicago developer, bent on the building's demise has successfully filed their applications.

The building is one of the few remaining vestiges of the once vibrant music scene on the Strip with bands such as the Doors, the Byrds, Frank Zappa and later Van Halen and Motley Crue playing there.

Preservationists haven't yet surrendered hope, but time is running out.

"This is an important place," pop culture historian Domenic Priore, author of "Riot on the Sunset Strip: Rock 'n' Roll's Last Stand in Hollywood" and the leader of the preservation effort told the Times "The Sunset Strip is an international landmark, and this building has an historic cachet." – CelebrityAccess Staff Writers