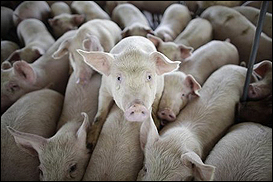 US & Mexico (CelebrityAccess MediaWire) — Public health concerns in the wake of the outbreak of Swine Flu have led to the cancelation of a number of events around the US & Mexico in the next week.


Events planned to celebrate Cinco de Mayo have been canceled in a number of cities, including Austin, Dallas and Milwauke.


Forth Worth has canceled its annual Mayfest, an event that typically draws more than 200,000 people, stating on the city's parks and community development "The Tarrant County Health Department, in the interest of public health and safety, has declared that all outdoor public gatherings must be canceled."


A Young Jeezy show at the Bob Carpenter center in Detroit has been called off, DelawareOnline.com reported after an outbreak of the virus was detected at the University of Deleware. A scheduled appearance by journalist Gwen Ifill at the University has also been scrapped.


According to the DelawareOnline.com, a show by Young Jeezy at the Bob Carpenter Center has been called off, as well as a talk by journalist Gwen Ifill, the host of PBS' "Washington Week" and moderator of last year's vice-presidential debate. Jeezy was to perform with up-and-coming rapper Drake, but due to worries that at least 10 students on the school's campus are suspected to be carrying the virus, the events were canceled.


Billboard is reporting extensive cancelations in Mexico as well, where public health officials have warned against public gatherings. Among the acts that have pulled the plug on planned gigs are Alejandro Fernandez, Marco Antonio Solís, Los Lobos and Alejandra Guzman. Finnish band Rasmus has also canceled while Mexican act Ha-Ash has rescheduled their show for May 7th.


Actor Hugh Jackman has also pulled the plug on an appearance planned for the opening of the summer blockbuster "Wolverine" which had set for Mexico City.


Both Metallica and the Jonas Bros. with scheduled gigs in Mexico City and Monterrey respectively, are still soldiering on, despite the onset of the epidemic.


If you have more cancellations to report, please email news@celebrityaccess.com and we'll help get the word out. – CelebrityAccess Staff Writers