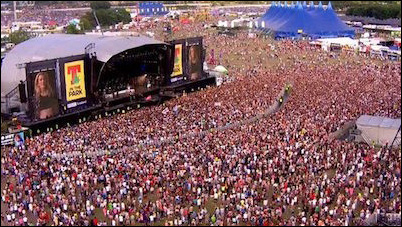 PERTHSHIRE, Scotland (VIP NEWS) — Scotland’s T in the Park has been granted a one year public entertainment license by Perth & Kinross Council.


Taking place on the grounds of Strathallan Castle from July 8-10, acts will include headliners, Stone Roses, Calvin Harris and Red Hot Chili Peppers alongside the likes of LCD Soundsystem, The Last Shadow Puppets, Disclosure, Bastille and The 1975.


Festival director Geoff Ellis, CEO of promoter DF Concerts & Events, said “I’m delighted with the council’s decision and that they have acknowledged the significant work that has been put into ensuring that this year’s festival will be remembered for all of the right reasons – incredible line-up, the best entertainment and fun with your mates.


“I’d like to thank all of our partner agencies – particularly P&K Council, Police Scotland, and Transport Scotland – for their input into the planning to date. I’d encourage fans to read the information and take a look at the new maps on the T in the Park website before they set off for this year’s festival.”


DF recently announced a restructure of the festival’s operational team after the highest number of serious assaults in T In The Park’s history was reported at last year’s event. With a new management team in place, organizers have released significant changes to the festival’s arena, security, campsite and transport set-up over the last three weeks. It was also confirmed today that all camping ticket holders will receive free Citylink travel tickets to and from the event.