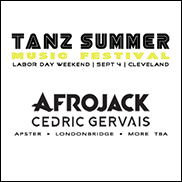 CLEVELAND (CelebrityAccess) — Afrojack and Cedric Gervais have been announced as headliners for the inaugural edition of TanZ SummerFest, a new music festival taking place in Cleveland.

Set for September 4th, the EDM-focused festival will take place on West 6th Street in the Warehouse District in downtown Cleveland. Other artists on the bill include Apster, LondonBridge and local talent DJ EV, Corrupt and Derek Armstrong on the main stage.

"We want the inaugural show and lineup to reach a wide audience and bring a real festival production to the heart of Cleveland," says Sam Krichevsky, CEO of TanZ Produced LLC, who are producing the show along with local nightlife mainstays #1 Media Events & Promotions. "We're confident this lineup accomplishes that, and the production design will be unlike any that has ever been seen for a concert in Cleveland." – Staff Writers