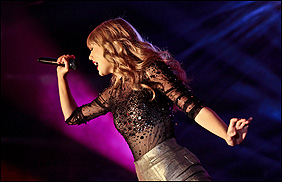 DENVER (CelebrityAccess) — After almost four hours of deliberation, jurors ruled in favor of singer Taylor Swift in her counter-suit against a former radio DJ over alleged assault and battery.

The six-woman, two-man jury found that the actions of the former country music DJ David Mueller, amounted to assault and battery against Swift.

Swift accused Mueller of groping her during a 2013 meet and greet before her concert at the Pepsi Center in 2013. Swift complained about the incident, leading to Mueller's dismissal from KYGO radio and prompting him to sue Swift, alleging tortious interference. Swift countersued, alleging assault and battery and the two cases were heard together in a federal court.

Jurors awarded Ms. Swift the $1 in compensation she had demanded in her lawsuit. The New York Times reported that her lawyer Douglas Baldridge had said she did not want to bankrupt Mr. Mueller but saw the award as a symbolic victory for women to prove that they could report such assaults without fear of facing a lawsuit.

"I acknowledge the privilege that I benefit from in life, in society and in my ability to shoulder the enormous cost of defending myself in a trial like this," Swift said in a statement. "My hope is to help those whose voices should also be heard. Therefore, I will be making donations in the near future to multiple organizations that help sexual assault victims defend themselves."

On Friday, Swift was dropped from Mueller's lawsuit after the judge ruled that there was insufficient evidence that she had fabricated the details of the event. Mueller's suit also includes Swift's mother and her radio promotions director Frank Bell, but Bell was found to be not liable in the matter.