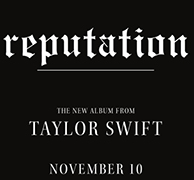 (CelebrityAccess) — Speculation that a brief social media blackout by singer Taylor Swift may presage new recorded material appear to be true as Swift confirmed that her upcoming album, titled Reputation, will be released on Nov. 10th.

Swift unveiled the new album via her Instagram account on Wednesday, with the first track from Reputation released on Thursday night.

Appearing on her Instagram, the cover features a black-and-white photo of Swift in a shirt and with wet hair in front of a backdrop of apparently false newspaper headlines and articles, all reading 'Taylor Swift'.

Reputation will be the sixth album for Swift, and the first since her monster hit 1989 was released in 2014.