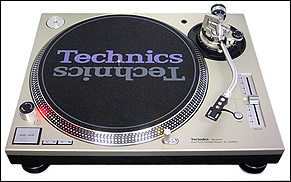 TOKYO (CelebrityAccess MediaWire) — Electronics giant Panasonic has announced that they are planning to discontinue the line of audio products under their Technics brand, most notably the iconic line of Technics turntables.

Included in the discontinuation is the venerable Technics SL-1200 series, long considered the standard for performing DJs. Also on the chipping block are the SH-EX1200 analog audio mixer and the RP-DH1200 and RP-DJ1200 stereo headphones with Panasonic citing "challenges in the marketplace" as the reason for the ending of the line.

According to the Tokyo Reporter, the company has seen a decline in the sales of analog decks of 95% in the past decade and Japan's last large scale vinyl pressing plant only produced approximately 400,000 discs last year, down from a peak of 70 million four decades ago.

Although there has been a shift to CD and digital music players in recent years, the Technics SL 1200s has been in continuous production since 1972 with more than 3.5 million units produced. The 1200s were widely regarded as one of the most reliable turntables ever produced and became ubiqituous in nightclubs and with professional DJs and audiophiles worldwide.

"Panasonic decided to end production mainly due to a decline in demand for these analog products and also the growing difficulty of procuring key analog components necessary to sustain production," the company said in statement provided to The Tokyo Reporter. – CelebrityAccess Staff Writers