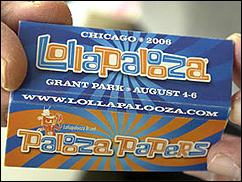 While indie rock band Cursive played one of the nine stages at the Lollapalooza music festival, a nearby air-conditioned tent was packed with people checking their e-mail, updating their blogs and charging their cell phones.
Some milled about waiting for a laptop with wireless Internet access to free up. Others plopped down on couches and watched satellite television — or a live feed of Cursive, performing just outside.

Visitors to this year's three-day edition of Lollapalooza, which began Friday in Chicago's Grant Park, will find technology almost as ubiquitous as the music.

They can download the festival schedule and band photos and audio clips to their iPods; create a digital wish list of the bands they plan to see, then share it with friends via e-mail; use their cell phones to play a 21st century scavenger hunt; or follow instructions displayed on the festival's jumbo screens to send politically minded text messages.

Drew Record, 21, spent much of Friday afternoon playing the Mindfield game. Completing tasks such as a leapfrog contest or telling jokes to a sad-looking clown led to clues that were text messaged to his cell phone and could ultimately lead to various prizes.

The University of Arizona student was aiming for a backstage pass to see Jack White's new band, The Raconteurs, but even if that didn't work out, he said he had a good time.

"When you're standing in line, when you're waiting for a new band to start, you can be texting. It's just kind of fun," said Record. "The whole concept of Lollapalooza is this weird sort of village of people and ideas and music, and this just takes it to the whole next level."

Realizing that the plugged-in generation of festival-goers are not about to leave their cell phones, cameras and MP3 players at home, Lollapalooza is certainly not the only music festival that has immersed itself in the digital age.

The Bonnaroo Music & Arts Festival in June in Tennessee featured a tent showing movies in the digital format, and visitors could upload their photos from the festival to share with others.

The Coachella Valley Music & Arts Festival, held in April in California, has its own MySpace page and highlights photos taken by concertgoers on its Web site as well.

And like Lollapalooza and several other festivals, a webcast of portions of the Austin City Limits Music Festival, held in Texas in September, will be streamed live over the Internet by corporate sponsor AT&T at http://blueroom.att.com.

Some of the earliest concerts streamed over the Internet were the series of Free Tibet shows starting in 1996.

David Friedensohn was at the company behind that move, and he thinks the burst of digital and interactive features now at music festivals is the result of advertisers and corporations "waking up and realizing this is the train that's leaving the station" in terms of reaching consumers.

Friedensohn said some of the most dramatic changes are happening in how people use cell phones. He's now CEO of Upoc Networks, which helps carriers, consumers and marketers share information via various types of mobile messaging. Teenagers, he said, treat mobile phones like "mini computers they keep on their hips."

Elyse Owen, 21, was certainly lost without a working cell phone at Lollapalooza. She got one text message for Mindfield before the battery gave out.

I forgot to charge it last night. I had like one bar this morning. I had to meet up with people so I was using it all this morning and then it just died on me. I was like, "Oh no. I have a whole day ahead of me and no phone," she said.

Eventually, Owen found the tent where she could place it in a small lockbox-type compartment where it would be charged for free.

One digital venture that was more politically motivated than the rest was sponsored by the Natural Resources Defense Council, one of the groups featured in the festival's "Causapalooza."

The NRDC's goal is to get thousands of concertgoers to add their virtual signatures via text message to a petition urging President George W. Bush to cut the country's reliance on oil.

The group is using banners and flashed messages on the giant screens next to the stages to get the text message address out over the weekend — and hoped to convince some artists to announce the cause from the stage, according to Jordan Kessler, manager of e-activism for the NRDC Action Fund.

"It's obviously great to use your cell phone to talk to friends and to text message friends and to make plans to listen to your favorite bands," he said.