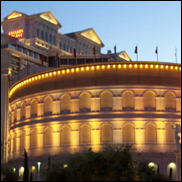 “The Colosseum is one of the most technologically advanced performance spaces in North America and has been the permanent home to some of the biggest stars in the history of Las Vegas,” said John Meglen, president and co-CEO of AEG Live/Concerts West. “We are thrilled to celebrate its anniversary and acknowledge the loyal workers who have made The Colosseum one the most respected venues in the industry.”

Built in 2003 for the premiere of Celine Dion A New Day…, The Colosseum is a modern replica of Rome’s architectural wonder, complete with world class acoustics and a classic style. After Dion’s legendary five-year run in December 2007, The Colosseum underwent an extensive transformation to prepare for the next generation of resident artists. Designed to accommodate stage shows of all varieties, The Colosseum seats 4,298 with no seat farther than 120 feet from the stage and is equipped with state-of-the-art audio and visual elements, including the largest indoor high-definition LED screen in North America (120 feet wide by 33 feet tall).

Since opening, The Colosseum has showcased only the biggest names in entertainment and has welcomed the likes of Jerry Seinfeld, Luciano Pavarotti, Gloria Estefan, Mariah Carey, Tim McGraw, Faith Hill, Carole King, Stevie Nicks, Luis Miguel and The Comedy Festival to its stage. The Colosseum is currently home to Bette Midler The Showgirl Must Go On, Elton John’s The Red Piano and Cher. –by CelebrityAccess Staff Writers