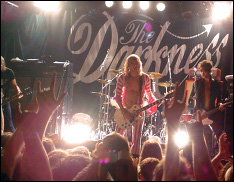 LONDON (VIP NEWS) — Rock band The Darkness have reformed and announced that they will play this year's Download festival.

All four original members of the band have reunited and will record a new album in April and May 2011.

The Darkness released two studio albums, winning three Brit awards in 2004, and had five top 10 hits including I Believe In A Thing Called Love.

The Suffolk band broke up in 2006 when singer Justin Hawkins quit.

Justin Hawkins told Newsbeat he'd been making tracks with his brother Dan, the band's guitarist, for a couple of years.

"It was frustrating for a long time to not be able to tell anybody because we've had to sort of keep it a secret.

"It was like a forbidden romance without the trail," he joked.

He also said he didn't know what to expect from the band's comeback.

"The main thing for us is to make sure that musically we turn the experience into something positive again.

The Darkness won three awards at the Brit awards in 2004 "We've been remembering why it was so much fun in the first place, just four men making loud music in a room," he said.

And he revealed he would be updating the colorful one-piece bodysuits which he was known to wear in the band's first spell in the charts.

"I think it should be a new phase and that should be extended to the clothing. Not a lesser phase, if anything a cranked up version. They'll be more good."

When he left in 2006 the other members of the band released a statement saying they were in "total shock."

The ex-members of the band had been involved in other projects since, with Justin Hawkins forming Hot Leg and his brother Dan plus drummer Ed Graham starting The Stone Gods.

But both those projects were put on hold in December 2010, sparking rumors the Darkness would reform.

Def Leppard, System Of A Down and Linkin Park have also been confirmed for Download, which takes place at Donington Park in Derbyshire in June.

Funeral For A Friend, Framing Hanley, Hyro Da Hero, Kvelertak and Plain White T's have also been added to the line-up.