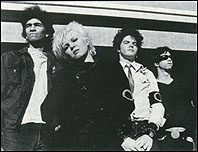 The Germs–Pat Smear, Lorna Doom and Don Bolles–will perform live for the first time since December 3, 1980 to commemorate the 25-year anniversary of the band's final show. They will also join Suicidal Tendencies, The Dead Kennedys, Marky Ramone and Flipper at the Grand Olympic Auditorium for the "Waking the Dead" show on October 29. In an unprecedented move, these punk rock luminaries will share a stage in a bona fide old school show at a venue known for holding the best punk rock shows in Los Angeles back in the day.

The Germs are one of the earliest pioneers of L.A. punk rock and the accidental inventors of hardcore. American and international tours are in the planning stages.

Actor, musician and star of popular television series E.R., Shane West will be the front man for the newly reformed and otherwise all original Germs. This unlikely teaming was spawned from one those so-crazy-that-it-works scenarios. It all started when West was cast in the role of late and legendary punk icon Darby Crash in the upcoming Germs biopic "What We Do Is Secret."

Original members Smear, Doom and Bolles were consultants on the film, and at the wrap party they performed with Shane on vocals. Those in attendance were blown away–not only by the insane punk rock apocalypse that still happens when they play those songs together 25 years after the ball–but also by West's intense performance and uncanny similarities to original Germs singer Crash.

The chemistry was so undeniable that they decided on the spot that it was finally time to perform Germs shows for the generations that never got the chance to experience the band in its heyday–even though they had all said it would never happen. Now, The Germs' line-up is: original members Smear (Nirvana, Foo Fighters) on guitar; Doom on bass; and Bolles (45 Grave, Celebrity Skin) on drums; and new addition West on vocals.