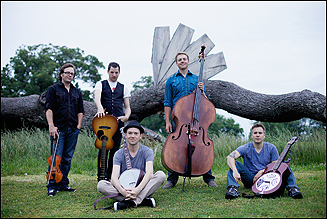 Produced by Cereberus Productions and the Artist Farm, the three-day music festival will be staged this year from October 5-7 with a lineup that includes Trampled By Turtles, Leftover Salmon, Keller & The Keels, Rubblebucket, Lake Street Drive, Nicki Bluhm & The Gramblers, Elephant Revival, and 17 others.

The Festy is staged at the private Concert Ground at Devils Backbone Brewing Company and space is available for a range of camping options. There are also a number of "less rustic" options available nearby, from bed and breakfast establishments to hotels.

The Stringdusters are also hitting the road this fall for for an extensive tour. The group will be touring in support of their Silver Sky album, which is about to be re-released on October 16 in a special deluxe version with new material on the band's own High Country label.